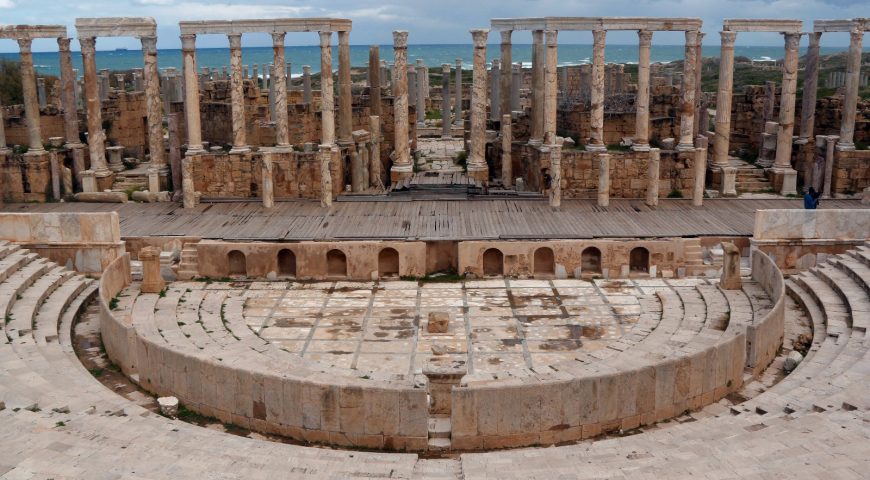 Travelling to Libya – What is Possible

Libya is famous for its Roman and Greek ruins and epic desert landscapes, and sadly more recently, its geopolitics and conflict. It has now become possible to travel to Libya and visit certain areas of this fascinating country, from the coastline littered with ancient sites like Sabrantha and Leptis Magna, some of the most complete Roman ruins in the world, to Libya’s vast interior desert where pockets of life can be found.

Here are a few of our favourite places where we can currently guide you:

One of the old three cities that made up the Tri-polis region, Sabrantha is famed for its spectacular theatre and ancient Roman ruins. A Phoenician trading-post that served as an outlet for the products of the African hinterland, Sabrantha was part of the shirt-lived Numidian Kingdom of Massinissa before being Romanized and re-built in the 2nd and 3rdcenturies A.D.

The World Heritage town of Ghadarmes, formerly a key trading centre in the middle of the desert, now stands as an illustration of a Berber town of old Islamic architecture. Situated within a natural oasis, Ghadarmes if known as “The Pearl of the Desert, and is one of the oldest pre-Saharan cities to still stand, making it a rare example of a traditional settlement.

The most complete Roman city in the world, Leptis Magna is home to the Triumphal Arch of Septimius Severus, the Ampitheatre, the Hippodrome, the Hadrianic Baths, the Basilica, the Temples of Hercules and Roma, the Severn Forum.

Triopli (“Three Cities”) is the capital and largest city in Libya, home to a sixth of Libya’s entire population. The city is known as the Mermaid of the Mediterranean for its turquoise waters and whitewashed buildings. The old town, Medina, still retains much of its old world charm. The Red Castle, an ancient government palace, is located on the outskirts of Old Medina. The palace complex with its numerous courtyards is well preserved and nearly intact. The Arch of Marcus Aurelius is a Roman arch outside the entrance to the Medina. The monument is dated to 165 A.D and is made entirely of marble. The arch was erected to commemorate the victories Lucius Verus (adoptive brother of Emperor Marcus Aurelius) over the Parthians in the Roman-Parthian War.

For flights to Libya, visa or itinerary information, please contact us on info@untamedborders.com