South Sudan may be the world’s newest country yet it can rival some of the oldest in terms of landscape and culture. In its short life, the nation has sadly seen more than its share of conflict and trauma. This instability added to poor infrastructure has meant that much of the country, both its landscape and its people, has remained unchanged. Outside of Juba, the capital situated on the White Nile, the true beauty of South Sudan is found in the different tribes, each with their unique facial markings, architecture and culture. There are estimated to be at least 60 different tribes co-exist in South Sudan, including the Toposa, Lotuko, Boya and Mundari tribes, speaking an array of dialects and languages. Modernisation and changing weather patterns threaten many of these tribes traditional way of life but for now, it is a glimpse into a fast disappearing way of life. A trip to South Sudan is not complete without a drink by the Nile and to catch a game of Boruboru. Similar to dodge ball and only played by women, it’s a wonder as to why this energetic game isn’t being played internationally. South Sudan is a diverse melting pot best understood by spending time with people who call it home.

The country’s capital and largest city, Juba is situated along the banks of the White Nile. The cities bustling activity can be found along the rivers banks where it is possible to eat or get a drink whilst taking in the magnificent sunset. Other things to do in Juba include watching a game of Boruboru, a version of dodge ball played by South Sudanese women and girls, visiting the memorial to John Garang, the young nation’s founding father, or fending off hawkers at Konyo Konyo market.

At the foot of the Boya Hills, east of Juba, are small settlements of the Boya tribe also known as the Larim tribe. The Larim are magnificent architects, creating beautiful wooden huts with great structural stability. When in the Boya villages, climbing the surrounding rocks grants beautiful views to take in the sunset or sunrise is a must.

The Mundari tribe are famed for their cattle herding. With their livelihoods being dependent upon raising livestock and agriculture, it is no surprise that they live north of Juba near to the White Nile where land is fertile and ideal for their cows to graze. Living amongst their cattle, you will have the opportunity to spend time with the tribe crowded around cow dung fires warding off insects watching wrestling or playing music, both popular pastimes. Witnessing sunrise amongst the Mundari and their long horned cattle is a memorable experience.

In the south-east of the country lie the Imatong Mountains, including Mount Kinyeti the tallest peak in South Sudan reaching over 3000metres. For the adventurous it is possible to hike and explore this plateau. The mountains are also home to the Lotuko people. The Lotuko are divided into 4 kingdoms, with each one occupying a mountain in villages made up of architecture fitting to its impressive surroundings.

One of the most loved national parks in South Sudan, Nimule extends over 500km along the border of Uganda, straddling the White Nile River. The park was originally created in order to protect the White Rhino, which is sadly now extinct. The park is home to a herd of approximately 70 elephants that roam back and forward between Uganda and South Sudan. Aside from elephants you can see animals such as hippos, warthog, baboons, vervet monkeys, Ugandan kobs, Goliath herons and more.

Boma National Park is located in the east of South Sudan near the border with Ethiopia. The park consists mainly of grasslands and floodplains and is home to a wider range of animals, such as lions, cheetahs, giraffe, eagles, leopards, zebra, kudu and much more. The park is particularly renowned for its large population of white-eared kob (a type of antelope).

South Sudan is home to the biggest expanse of pristine savannah in Africa, with almost 12,000 square miles untouched by human activity. The land is also home to one of the greatest wildlife spectacles in the world – the migration of over a million land mammals. Two species make up this mass migration – tiangs and white-eared kobs. It’s estimated one million kobs migrate from Boma NP to Bandingilo NP and are joined there by approximately 125,000 tiangs who migrate from the swamps of the Sudd region.

The Sudd is a vast swamp formed by a section of the White Nile called Bahr-al Jaba. The swamp covers one of the world’s largest wetlands.  In the Sudd the river flows through multiple channels in a pattern that changes every year. Crocodiles and hippos frequent the shallow waters. The thick vegetation makes it impossible for boats to pass through. The swamp is well known for its unpredictable and non-permanent floating islands. In fact, the term ‘Sudd’ has come to refer to any large floating solid vegetation island. An estimated 1 million people live off the Sudd eco-system.

LOI provided by UTB in order to obtain visa on arrival.

Tropical – more or less same temperature all year round. Hot and humid.

Best to take cash in US dollars.  US dollars can be spent, no need to  exchange to local currency. For up to date exchange rates please have a look at www.xe.com

Most guesthouses and hotels have adequate Wifi. In cities 3G works well.

Coastal geography means fish is eaten in abundance. Camel meat is also common. Millet and corn used in many dishes, including in a pancake similar to injera common in Ethiopia. Dishes are often spiced.

Alcohol is illegal in Somaliland.

The FCO advises against travel to South Sudan. This is due to anti-government forces operating in the country, government instability and the risk of opportunist violent attacks. We avoid travel to most of the country and take precautions in the areas we do travel. Contact us for information on where we do and do not guide in this region and how we work to minimise risk for our guests and staff. 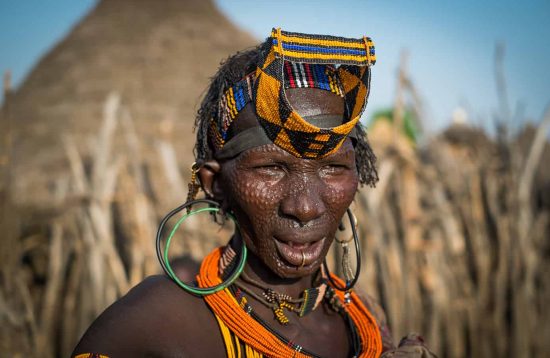 Experience the complex diversity of the world's youngest country through an immersive 8-day journey into South Sudanese culture. Contact us for further details about our trip in March 2022.