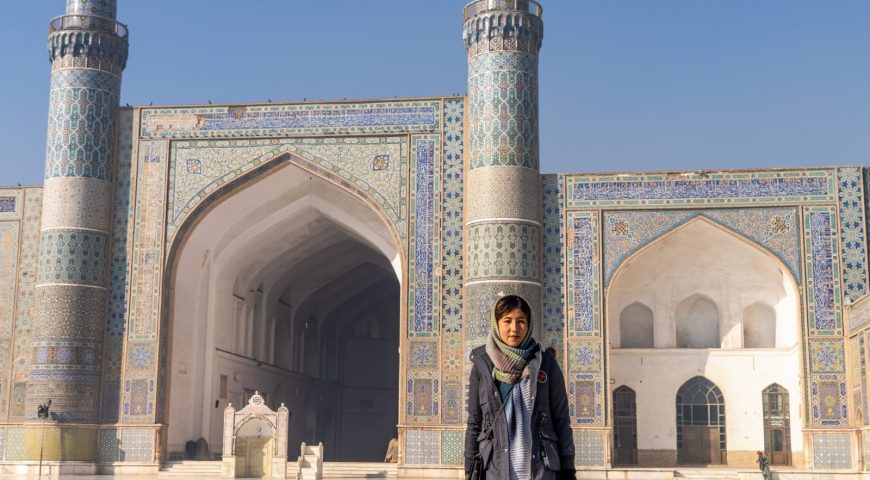 Fatima escaped Afghanistan during the 2021 Taliban offensive and now lives in Italy. During the hour-long session, she’ll give some insights into the current situation in Afghanistan and the country’s tumultuous history, before taking guests on a virtual tour of the Great Mosque, bustling bazaars, ancient shrines and modern cultural heart of Herat.

Profits for the tour will be split between Fatima and an underground organisation that’s educating girls in Afghanistan.

Taking place in a secret, rural location – which cannot be disclosed for security reasons – the classes are held for two hours per day, six days per week. 30 girls aged 10-18 have been attending since January 2022. They are mostly refugees from provinces with a strong Taliban presence.

Since the Taliban seized control of Kabul in August last year, UNICEF estimates that 850,000 Afghan girls have been prevented from attending secondary school. Tickets from Untamed Borders’ virtual tour of Herat will help pay for vital books, stationery and teachers’ fees for girls fighting for an education in a country where they are largely banned from going to school.

Fatima says: “I’ve always fought to be a changer, not a victim. I’ve made it out, but now it’s time to help other girls who are stuck in the same hell I have escaped from. We can support refugee girls to go forward in achieving their dreams, getting an education, fighting for their stolen rights and overcoming the current gender discrimination and humiliation. We must stand by their side and hold their hands, no matter how far away we are and how small our contribution is.”

The organisation’s teacher (whose name is omitted for security reasons) says: “Girls don’t have the right of education, girls aren’t free, some girls don’t even have the right to go out and play with their friends, they should always be at home doing the housework. Because of the problems of family and society some girls can’t achieve their hopes and goals. Please don’t give up on these problems. As I say to my students, if you try, you can fly.”

James Willcox, founder of Untamed Borders, says: “For us at Untamed Borders, nothing beats being somewhere in person. But the chance for Fatima to be able to continue showing her hometown to our guests, even though she cannot be there in person, is important in its own right. We’ve taken guests to Herat since 2008 and it’s an incredible city, with Afghanistan’s most architecturally complete medieval city centre.

“Much of its most striking architecture dates back to the Timurid Empire, and was actually commissioned by a woman – Queen Gawhar Shad, the wife of Timurid ruler Shahrukh. It’s important to remember the cultural wealth of this amazing country, despite the troubling headlines about Afghanistan.”

Tickets for Virtual Afghanistan Tour with Fatima: Herat cost US$60. Guests can tune in on 23 August 2022 from 7pm. To book, visit the Untamed Borders website or email info@untamedborders.com. Once booked, guests will receive an email explaining how to join the virtual tour a few days in advance.

For more information, images or access to interviews with Fatima or Untamed Borders founder James Willcox, please contact florence@untamedborders.com. Quotes and testimonials from past virtual tours are available.

Born in one of the least developed areas of Afghanistan, Lal Sar Jan-gal District in Ghor province, Fatima was working as a shepherd by the age of eight. Although it was a tough job, she believes it was this experience, running in the hills after animals, that first got her interested in guiding and the outdoors. One of seven children, Fatima’s sisters were married at age thirteen, but she refused, and forced her parents to send her to school, where most girls were forbidden to attend.

In a country with some of the least visitors in the world, historically plagued by war and where women’s rights, literacy rates and employment opportunities are some of the lowest in the world, Fatima broke the mould and wanted to work – not “babysit a husband”.

Fatima learnt basic reading, which meant that when her family moved to Herat due to Taliban attacks on Ghor province and were too poor to send her to school, she could teach herself at home. She went on to successfully graduate from Herat University with a degree in Journalism and Mass Communication, a challenging and often dangerous job for women in Afghanistan.

Despite all the challenges, Fatima started a successful online travel blog, which is how she was introduced to Untamed Borders in 2020. Despite the added pressures of COVID-19, Fatima led her first group of tourists in Herat for Untamed Borders that year.

“I thought Afghanistan was not a safe place for a woman to be a tour guide,” explains Fatima, “but I realised that I have to be the one to create this safe place for other women.”

During the 2021 Taliban offensive, Fatima escaped Afghanistan with the help of Untamed Borders, managing to board a plane from Kabul to Italy. She’s now preparing to study international government and politics at Bocconi University in Milan.

Fatima’s plan is to continue guiding and become a professional journalist, writing for travel magazines, and she hopes to eventually establish an organisation that trains female tour guides in Afghanistan. She is currently Afghanistan’s only female tour guide, but she is determined not to be the last.

Founded in 2007, adventure travel company Untamed Borders runs bespoke trips and small group adventures to some of the world’s most interesting and inaccessible places. Specialising in trips to Afghanistan, Pakistan, India, Middle East, East Africa, former Soviet Central Asia and the Caucasus, Untamed Borders takes over 250 guests a year to unusual and largely unvisited areas of the world.