Whether you’re devoutly religious or totally apathetic to anything even remotely spiritual, the world’s first Christian nation is guaranteed to ignite your fascination with its history that dates back more than 3000 years. Unsurprisingly this landlocked country has a multitude of monasteries to explore, and in the strange chance you become bored with these relics of the past, then you’re still in luck as many historical sites are also located in areas of astounding beauty, such as Haghpat, Geghard and Tatev, which will leave you with ample time to contemplate the meaning of life. Culture-wise, Armenia is a complex blend of Russian, Turkish, and Persian influences, along with some Mediterranean zest, so you won’t be short of chances to discover and learn a little about each, regardless of how long you spend here. 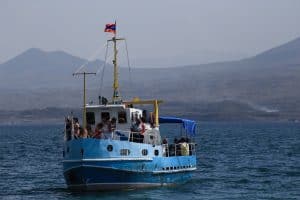 Lake Sevan is one of the largest freshwater alpine lakes in Eurasia and covers 1/5 of Armenia’s surface area. The only island on the lake is Sevanavank, which has the Sevan Monastery. Although nowadays it’s not technically an island, as it has been formed into a peninsula since Stalin’s industrious team decided to artificially drain the lake. Despite some modern environmental problems facing Sevan, it’s considered a national treasure and is one of the three great “seas” in historic Armenia, which comprises Lake Van and Lake Urmia, in Turkey and Iran respectively. 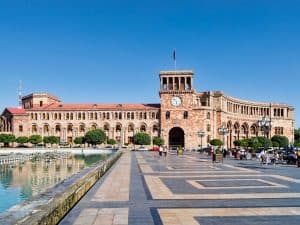 With Armenia being one of the oldest countries in the world, it shouldn’t be too surprising to hear that the capital, Yerevan, is also one of the oldest continuously inhabited cities. One of the key landmarks of the city centre is the Cascade built in 1971. This monstrous staircase comprises eight levels and perfect views of the city below, so it’s guaranteed to take your breath away. 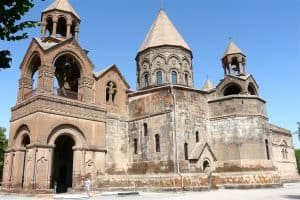 Located in the city of Etchmiadzin, this cathedral is believed to be the first one built in ancient Armenia in the 4th Century, and was designated as a UNESCO World Heritage Site in 2000. 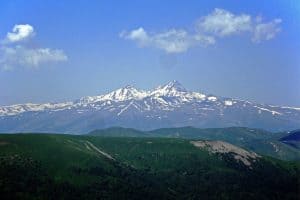 Mt. Aragats (4090m) is sometimes confused with Mt. Ararat (5137m), the highest point in Turkey. Aragats is an isolated four-peaked volcano massif which encompasses 1/5 of Armenia’s total land area. Although the first ascent was completed by an Armenian-German duo way back in 1843, any visit to Aragats peaks or verdant plains will be a rewarding experience. 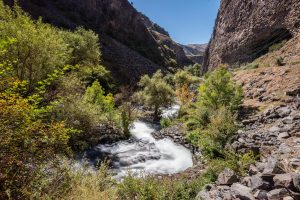 One could easily spend a couple days traipsing around the Yeghegis Valley scoping out places such as; the fortified monastery of Shativank, countless khachkars (stone crosses) carved into the side of abandoned monasteries and standing alone in moody ancient cemetaries, or the 5th Century Smbataberd fortress perched atop a hill which affords great views down into the valley and is often considered Armenia’s most impressive fortification.

Visa free for many countries including EU nationals, Russians, USA and Australian nationals. E-visa (add link) or visa on arrival necessary for those not eligible for visa free entry. LOI needed for certain nationalities.

In the northern hemisphere seasons with hot summers and snowy winters.

Internet is good in cities, rural areas less so.

No special dress code. When visiting churches recommended to dress modestly including long tops and trousers for both men and women.

The FCO considers Armenia to be a low risk travel region. However it does advise against travel to the border area between Armenia and Azerbaijan as well as the Artsakh/Nagorno Karabakh region. Primarily this is due to the frozen conflict between the two countries rather than immediate risk from attack by individuals. We take precautions when travelling to Armenia. Contact us for information on how we work to minimise risk for our guests and staff.

Trips in the Caucasus